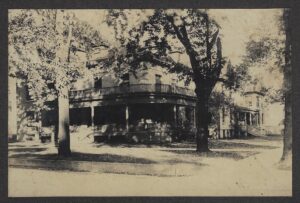 The WEAA was started in 1871 by Hannah Bayley Pearsons, Mary Haskin, and other Evanston women to promote higher education for female students at the Evanston College for Ladies and to nurture their material and spiritual welfare. It was originally known only as the Educational Association. By 1873, the Evanston College for Ladies had merged with Northwestern University and the WEAA ceased to exist as originally conceived, though the Aid Fund Committee of the Association took on its name and function. In 1879, the WEAA voted to help women with loans rather than outright grants. By 1904, over 1400 students had received aid from WEAA, and the association started “House Scholarships” that provided free housing. By 1922, over 50 girls lived in WEAA halls for free. 1933 was the most financially difficult year for WEAA, with Pearsons hall closing and sold to NU in 1935. During WWII, it extended help to student nurses at Evanston Hospital. By 1968, the WEAA decided to turn management of Chapin Hall over to the University and officially disbanded.

In 1869, local women formed the Women’s Educational Aid Association (WEAA) and founded the Evanston College for Ladies to take over the work of North Western Female College and foster a closer connection with Northwestern University as it became coeducational. The college was entirely staffed and run by women, with Frances Willard as college president. In 1871, 236 women were enrolled and a substantial new building for the college was started, but financial problems resulting from the Chicago fire left its future in doubt.


Notes: Building History: 1872- Mrs. Huse and Mrs. Hitt offered and solicited donations for purchase of a home for scholars of the Educational Association. Named "College Cottage" and located at Orrington and Clark. It operated as a self-governing coop for female students, as women paid $2 a week for their stay and shared in housework. 1886- College Cottage was enlarged and improved. 1901- renamed Pearsons Hall in honor of Hannah B. Pearsons' 30 years of dedicated service. June 1901- Dr. DK Pearsons offered to build an additional dorm, named to honor his sister-in-law, Julia A. Chapin (Chapin Hall). 1912- Morse House, located near Pearsons Hall, was purchased to accomodate students and act as an infirmary. 1929- sold Morse House to University to finance repairs to Pearsons Hall. July 1933- Decided to close Pearsons Hall 1935- Pearsons Hall sold to NU. 1966- Chapin Hall in need of extensive reapirs. After deliberation decided to turn management of Chapin Hall over to University. June 1968- Chapin became University dorm.