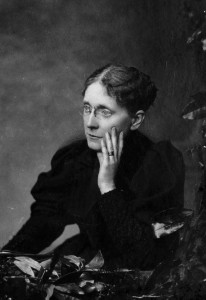 
World renowned social reformer Frances Elizabeth Caroline Willard (1839-1898) lived in Evanston for the entirety of her adult life. Through her efforts, the Woman’s Christian Temperance Union became the largest women’s organization in the U.S. before 1900, mobilizing countless women to take on a wider role in the world through temperance activism. Her “Do Everything” reform agenda included advocating for women’s suffrage, the 8-hour work day and age-of-consent laws. Her presence in Evanston made the community a player on the national reform stage, and gave local women a glimpse of a larger world.

Frances Willard was a social reformer and organizer, author and speaker, woman’s rights advocate, the second president of the Woman’s Christian Temperance Union (WCTU), and the founder of the World Woman’s Christian Temperance Union. She was a leader among women of her time and generation, and influential in her work by changing the relationship between women, the public sphere and politics around the world. To her contemporaries, Frances Willard was the most famous woman in the United States. Though Willard is remembered for a variety of feats in her life, perhaps she is best known for her temperance work—work she accomplished, by and large, from her home in Evanston at 1730 Chicago Avenue between the years of 1874 and 1892.

Willard first became an officer of the WCTU in 1874 when she was elected corresponding secretary. By 1879, she took over as the second President of the WCTU. As President of the WCTU, Willard changed the direction of the organization from one solely focused on temperance, to one that was more encompassing of all issues of importance to women. Under her direction, the WCTU became the largest women’s organization in the United States. Her “Do Everything” policy created over forty WCTU departments to carry on the organization’s educational objectives and to promote its many causes such as public health, sanitation and other locally pressing problems and social ills. Willard used temperance as a platform through which to politicize and organize woman on a variety of fronts; the prohibition of alcohol, she thought, would improve the morals of society and thus lead to further reforms.

Willard thought of the WCTU as a school for women, which would give them a chance to achieve identities beyond those of wives and mothers while also using these identities to their advantage and as inspiration. For example, using the phrase “Home Protection,” Willard convinced WCTU women that having the vote would give them power to make or keep their towns dry. She gave new life to the suffrage movement by urging the introduction of woman’s suffrage on the local level before working to achieve a national constitutional amendment.