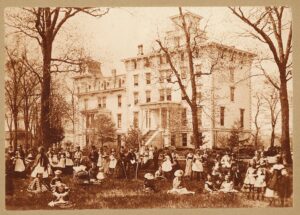 North Western Female College offered college preparatory courses both to women (day and boarding students) and young men (day students only), as well as collegiate coursework for women only. The College’s “practical, thorough, and extensive” program of instruction included courses in classical literature, natural sciences, grammar, arithmetic, history, French, German, and eventually Spanish and Italian, along with “ornamental branches” such as music and drawing.

The College was located on the block of land it purchased from Northwestern University bounded by Chicago Ave, Lake Street, Greenwood and Sherman Ave. Its first building was destroyed by fire in the college’s first year. Its second building was opened in 1857 and included lecture hall, a lecture room, recitations rooms, a library and boarding rooms for students and faculty.

Its founders were William P. Jones and his older brother J. Wesley Jones. William P. Jones was a graduate of Allegheny College in Pennsylvania and had served as principal of Peoria Female Seminary before coming to Evanston. He and his brother had become interested in women’s education and had toured Eastern colleges and discussed the issue with other men who went on to found Vassar and Wellesley colleges. At the time, the only institutions of higher learning that admitted women were Mt Holyoke and Oberlin colleges.

In 1856 the College offered degrees of Laureate of Literature, Laureate of Arts, and the “honorary titles” of Mistress of Science and Mistress of Arts. By 1860 it had dropped the literature degree and added the degree of Laureate of Science. By 1870 young ladies also could choose an “elective” program that excluded classical language and literature, leading to an alternative “Elective Degree.”

Aiming to safeguard the “health, morals, and refinement” of the young women, College administrators carefully regulated female boarding students’ conduct, social activities, and exercise. In 1855, for example, no female student could receive a male visitor who did not first present a letter of introduction to the College President; thereafter she could converse with the man in the parlor on a Saturday, but the interview could last no longer than 30 minutes. The College forbade boarding students from leaving the grounds after 7:00 pm, missing church services on Sunday, running on the stairs, and talking during study hours. A 30-minute walk each day was mandatory. Alumnae later recalled that these strict rules inspired Northwestern University men to term the Female College the “Jones Nunnery.” The women did participate in polite sports (such as croquet and skating) and formed a “Minerva” literary society. In 1858 Female College students published Evanston’s first printed newspaper, The Casket and Budget.

Throughout its short history, the Northwestern Female College produced 72 graduates, 31 more than Northwestern University graduated in the same time period. It merged with the Evanston College for Ladies in 1871.

North Western Female College (unaffiliated with Northwestern University) opened its doors in Evanston in 1855 to more than 80 students, but by 1868 it was struggling to survive. Funded and run by William Jones and his brother Wesley, the college was meant to be a profit-making venture, offering young women of the Northwest a “thorough Collegiate Education near home and amid rural seclusion as will secure every possible guaranty for health, morals and refinement.”