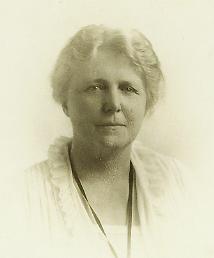 
Helen Palmer Dawes, a noted Evanstonian, was instrumental in several organizations. Born in Washington, Ohio in 1869, she married Rufus Cutler Dawes, the brother of Charles Gates Dawes. Rufus was a utilities director, civic leader and banker. In 1913, while President of the Women’s Club of Evanston, Helen appropriated money from the treasury to pay Evanston’s first food inspector which led to reforms in food safety and was credited with the prevention of an epidemic of typhoid fever in Evanston. She was also during this time the first female library board member in Evanston. At the start of WWI, Dawes collected 32,000 pounds of food for needy people in Belgium, at the request of Anna Gordon. During World War I she helped to found and manage a program for food conservation (canning and storing garden products, and holding canning demonstrations for women all over Evanston) so that factory goods could be used by the military in Europe. Also the kitchen helped to care for flu epidemic people in the Fall of 1918, and became a successful cooperative housekeeping business in 1919. On top of her charitable work and leadership positions (including the Fornightly Club of Chicago, University Guild, and the Chair of the International Relations Committee of the General Federation of Woman’s Clubs), she served as the official hostess of the 1933 Century of Progress and created a women’s board as well as served as a Fair Trustee.