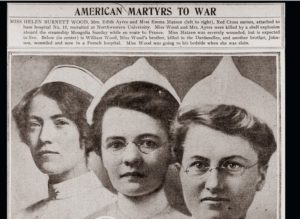 April 6, 2017 marks the centennial of the U.S. entry into WorldWarOne. The EvanstonHistoryCenter is chronicling some of the fascinating stories behind Evanston’s role in the war and the people who fought, served, and died. In honor of this somber anniversary, EHC is highlighting the story of Helen Wood, a resident of the city, who came to Evanston from her hometown in Scotland. Wood, a nurse, set sail on the USS Mongolia in May 1917, headed for Europe to serve her adopted country. Wood was among the first casualties of the war and the first Evanston resident to die in the conflict. You can read her story on the EHC website: http://evanstonhistorycenter.org/…/evanston-rem…/helen-wood/. Or visit the EWHP research database – https://evanstonwomen.org/project-database/.

On Thursday, April 20th from 1-5 p.m., The Edith Ayres and Helen Burnett Wood Memorial Symposium on U.S. Nursing in the First World War will be held at University of Illinois at Chicago. Five noted historians and archivists, all experts in the history of WWI Nursing and in the history of three of the Chicago base hospitals that served the wounded in France, will present their scholarship. Discussion will follow. This Symposium is presented in support of the United States World War One Centennial Commission, Illinois Centennial Committee. To register, visit https://www.eventbrite.com/e/us-nursing-in-the-first-world-war-a-symposium-tickets-32235338766.

And, Northwestern University is highlighting its own history related to the war. An onsite exhibit, Northwestern Remembers the War, will be up from March 27 – June 16 at University and Deering Libraries. An online exhibit is viewable here and includes many stories of the university’s role in the war, including the stories of the nurses from Base Hospital 12, and other Evanston women. More information can be found here.

1 thought on “Evanston Women and World War One”