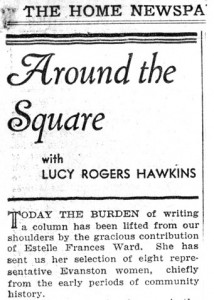 We aren’t sure of the exact date of this article, but believe it is from sometime in the early 1930s. The newspaper had asked readers to send in their suggestions for a list of important women in Evanston’s history.

Local woman Estelle Frances Ward, herself a woman-of-note, submitted a list of eight women she thought fit the bill.