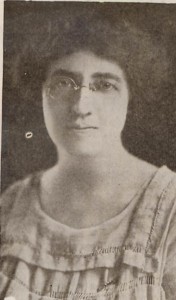 
May Wood Simons (1876-1948) was a social reformer, writer, and teacher. She developed nationally acclaimed programs for the assimilation of immigrants and the political education of women, and published several notable works, including Women and the Social Problem and Outline of Civics. She and her husband were members of the Socialist Labor Party and she became a significant figure in the socialist movement as a lecturer and assistant editor of the Chicago Party Socialist (1907-1910).

In 1909, the first National Woman’s Day was held throughout the United States on the last Sunday of February, the 28th. It was organized by the Socialist Party of the United States’ newly formed Woman’s National Committee to celebrate the political rights of women. Evanston resident May Wood Simons was a delegate to, and later head of, the committee and spoke in favor of the Socialist party supporting women’s suffrage. Simons and her husband, Algie, wrote for and edited several socialist publications, including the Worker’s Call, the Chicago Daily Socialist, Internationalist Social Review, Coming Nation, and the Party Builder. Simons resigned from the Woman’s National Committee in 1914 because of the lack of care for women’s issues by the Socialist party. Afterwards, Simons devoted herself to the cause of Americanization of immigrants during the First World War, eventually becoming the chair of the Americanization Committee of the Milwaukee County Council of Defense. She also continued to work for women’s issues, including joining the League of Women Voters and eventually gaining a position of leadership. Simons also went on to pursue a PhD in economics from Northwestern University, which she received in 1930, and also became a part-time instructor there. She published an economics textbook in 1945 entitled Everyday Problems in Economics.