Nurse Helen Wood was killed on board ship, en route to France, making her one of the first U.S. casualties in WWI. Buried with military honors, a funeral parade was held in Evanston in her honor. Trained at Evanston Hospital Nurses Training School which was affiliated with Northwestern University, Wood was a member of the Reserve Army Nurse Corps, attached to Evanston Hospital, and was to serve at Base Hospital no. 12.

Helen Burnett Wood was killed on board the U.S. Steamer ‘Magnolia’ en route to France during the First World War. She was killed when a piece of shell struck her during target practice. Another nurse, Edith Ayres was also killed, while Emma Matzen was wounded, both from Chicago. All three women were traveling to France as Red Cross nurses for Base Hospital no. 12. Previously, Wood was on the nursing staff of Evanston Hospital, and was night superintendent for a time. She was the first Evanston resident to die in WWI.

At the time of her death, Wood had been living in Evanston for several years, training and later working at the Evanston Hospital Nurses Training School. She was born in 1888 in Portobello, Scotland, where her parents and several siblings still lived. She was the oldest of three sisters and three brothers. Before the war, two of her sisters, Annie and Janet, had immigrated to the U.S and worked as domestics. When Helen came to Evanston she lived with her sister, Janet, in the home of James and Ina Hall, at 2044 Sheridan Road. James Hall was an accountant who had been born in Scotland in 1876 .

By 1917, the war had taken a heavy toll on the Wood family: Helen’s brother, William Wood, served with the 5th Royal Scots. He was killed in action on June 28, 1915, at Gallipoli. Another brother, Johnson, was seriously wounded and did not survive.

As these tragedies befell her family, Wood was far from home. Upon the U.S. entry into the war, she wanted to do her part to help those in need, and so she elected to go overseas.

Wood was attached to the U.S. Army Base Hospital, No. 12, also known as the Northwestern University Base Hospital, since a majority of its personnel came out of the university.

In May 1918, she received her official orders to join the Base Hospital staff on its way to New York where the staff would embark for Europe. 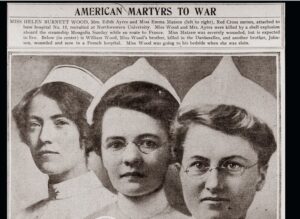 On May 22, 1917, one day after the ship set sail from New York, one of the ship’s guns had exploded during a practice drill, sending a shower of shell fragments across the deck. Helen Wood and Edith Ayres, two of the sixty five nurses on board were killed, and one nurse, Emma Matzen, was wounded. Immediately, the ship turned around and sailed back to port, its flag flying at half staff. These two nurses were among the first Americans to die in World War I.

There was widespread horror and outrage following the accident. Soon, an inquiry was launched. The text of the inquiry can be found here.

In Evanston, Wood’s body lay in state at the home of James and Ina Hall, where Helen had lived. Upon news of her death, mourners were asked to donate funds to help her parents. Now, three of their children were gone. Her funeral was held at Evanston’s First Presbyterian Church. She was buried at Rosehill Cemetery in Chicago.

At Northesk Parish Church in Musselburgh, Scotland, near her family home, a memorial plaque lists Helen Wood’s name. She is listed at the top of the plaque, the only woman. Her brother William is also listed on the very same plaque. At the outset of the centennials of World War I, her relatives in Scotland began to re-tell her story, proudly, and with awe. You can read about their remembrances of her here.