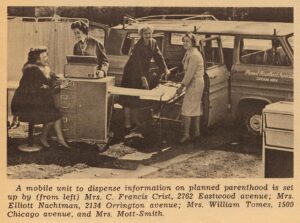 The Illinois Birth Control League started making family planning resources available in Chicago in 1923 and gradually incorporated surrounding geographical areas, gaining a surprising amount of support and momentum from community groups. As part of this effort, the Evanston Birth Control Center opened in spring of 1932 at 800 Davis Street and was a reproductive health care resource for Evanston residents run by the Chicago Birth Control Center.  It aimed to provide contraception and family planning advice to low income women who didn’t have access to private physicians, thirty years prior to public health officials declaring family planning as an essential part of medicine and public health. Initially, the Evanston Center was visited by a doctor, nurse and social worker from the Chicago Center, but shortly after its inception, a local committee was formed and all but the monetary responsibilities were assumed by them.

During this era, birth control was making history as both a social and medical reform and it wasn’t until half a century later did birth control become legal in America. Activists involved in spreading the controversial word risked a great deal to provide services to American families. It was in the early 1920’s that the topic of birth control started to be viewed as a social issue as well as a medical issue and a long battle of social, legal, medical and political agencies embarked on making birth control  widely available for American’s.  However, equally matched to the determination of supporters for birth control were those who strongly opposed it and believed birth control to be medically unsafe and morally destructive.

In 1935, the Evanston Committee of the Illinois Birth Control League became a member of the Evanston Council of Social Agencies (a predecessor to the United Way), marking it as one of the earliest in the country to gain that level of community support. In that same year, they opened a storefront for the distribution of family planning information in the Carlson Building on Church Street. In 1936, they received a visit from Margaret Sanger, who spoke to a full house at First Methodist Church. The name changed in 1941 from the Evanston Birth Control Center to the Evanston Planned Parenthood Center following the national renaming of the organization. From 1947 until 1952, the EBCC

was an independent operation, working in conjuction with other local institutions such as Evanston Hospital and The Cradle to distribute family planning information and offer Evanston women reproductive healthcare and choices. It also was one of the first organizations to offer infertility counseling and ran mobile medical clinics in low income neighborhoods.

The organization joined what is now called the Chicago Area Planned Parenthood Association in 1953. The work of the center included family planning services for teens, infertility counseling, and mobile clinics to low-income neighborhoods. In 1964, oral contraceptives were offered for the first time at the center. In 1969 the City of Evanston Health Department assumed responsibility of the center’s operations.

This organization provided women in Evanston access to medical care and family planning, starting in 1932. During this era, birth control was making history as both a social and medical reform and it wasn’t until half a century later did birth control become legal in America. Activists involved in spreading the controversial word risked a great deal to provide services to American families. This was thirty years before public health officials or even the American Society of OB-GYNs declared that family planning was “an essential part of medicine and public health.” The EBCL was a progressive force in the field of female reproductive health and rights, decades before Roe vs. Wade or widespread acceptance of family planning.