On Friday, March 7th, Evanston will mark International Women’s Day 2014 with a breakfast celebration and keynote speech by Scheherazade Tillet, one of today’s rising female activists and an emerging voice in the movement to end violence against girls and women. Ms. Tillet co-founded the non-prot A Long Walk Home, Inc., which uses art therapy and visual and performing arts to end violence in our homes, schools and communities. The event will take place from 7:45 – 9:30 a.m. at the Woman’s Club of Evanston, 1702 Chicago Avenue. RSVP at YWCA.celebrations.com/IWD2014. 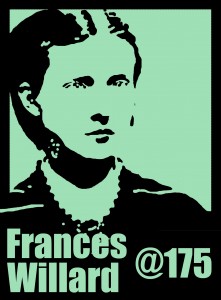 Two kick-off events for FrancesWillard@175 will also take place in March. 2014 marks the 175th anniversary of Frances Willard’s birth. A rolling series of events are planned to re-introduce Willard, well-known for her temperance work, as the social justice activist and radical progressive she really was.

On Saturday, March 8th, a Day of Service in Honor of Frances Willard will take place. The theme of this day is Do Something! Do Everything! Individuals and organizations can serve a few hours or all day. All are encouraged to sign up and record their hours at volunteerevanston.org.

A Community Open House will be held on Sunday, March 16th from 1-4 p.m. at the Frances Willard House Museum, 1730 Chicago Ave, Evanston. Tours and refreshments will be offered. A new exhibit highlighting Willard’s early activism for woman suffrage will be open for viewing.