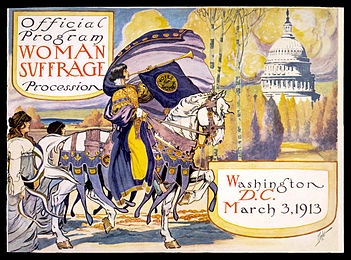 2013 brings the 100th anniversary of two important women’s history moments – one with a national interest, one with a particular interest in Evanston and Illinois. In March of 2013, the nation will mark the anniversary of the 1913 Washington D.C. suffrage parade. The crowd response to this parade, turning a peaceful march into a near-riot, altered the women’s suffrage debate in the U.S., bringing much needed attention and sympathy to the cause. Many scholars believe this moment propelled the woman’s suffrage movement into its final stages, leading to the 19th amendment to the U.S. Constitution giving women the right to vote, finally made law in 1920. For more about this history and plans to commemorate the parade, visit here.

In June of 2013, Illinois women will celebrate the passage of state law that gave Illinois women the right to vote in all elections not specifically prohibited, including presidential electors. Long spearheaded by Evanstonian Catharine Waugh McCulloch, the Illinois campaign came to a head in the spring of 1913 with new strategies and carefully planned political action that finally brought results. In Illinois, the League of Women Voters is leading the celebration and more can be found, including lots of great history, on their web site here.

In addition, plans are in the works to celebrate this anniversary in Evanston, including a Suffrage Rally similar to the one held here in June of 1913 to celebrate passage of the law. The 1913 celebration was described by a local newspaper as a “first-class noise-making affair” and the “largest public demonstration in Evanston history.” Suffice it to say that in Evanston, support for suffrage was such that the entire town turned out to welcome women as full citizens and fellow voters. Stay tuned for more and reserve the evening of June 14th for the rally!